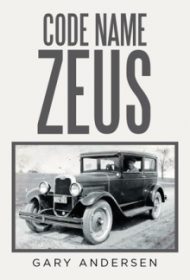 In Code Name Zeus, author Gary Andersen recounts how a group of entrepreneurs prepares for the collapse of American society.

In the late 1920s, Robert Barzinsky and Jack Barnett team up to build a company Robert calls GLO, which stands for “gold, land and oil.” The two men believe those three commodities will provide security in the face of economic turmoil and government overreach.

As the decades progress, Robert and Jack establish a base in Kursk, Texas, gathering gold and agricultural and technological resources in preparation for the disaster both are sure will come. Like-minded family and colleagues join them over the years. When catastrophe strikes sometime after the Obama presidency (no date is specified), the group at last finds its efforts paying off.

Andersen’s novel is undeniably ambitious in scope and theme. Its storyline calls to mind the works of both James Michener’s historical tales and Ayn Rand’s polemical sagas. Michener’s and Rand’s major works, however, are hefty tomes, giving their expansive plots and arguments room to develop. Clocking in at under 300 pages, Code Name Zeus reads more like an outline than a fully developed novel.

Andersen emphasizes certain plot aspects to an odd degree, while minimizing others that are potentially more exciting. For instance, readers learn the details of Jack’s eating habits on an early reconnaissance expedition, but the death of another character’s girlfriend, which devastates him, is dealt with in a few perfunctory sentences. Although Andersen imbues his characters with occasional sparks of life, too often they feel like mouthpieces (whether through dialogue or narration) for the author’s sociological ideas and political opinions.

Code Name Zeus may provide some moral support to true believers in Andersen’s vision of a libertarian, technocratic utopia, but the story requires substantial revision before offering much appeal for general readers.