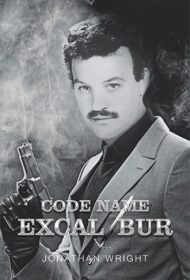 The first volume of a trilogy, this fictional story based on the author’s life chronicles its protagonist’s journey from childhood to his early 20s, when he is on the verge of becoming a spy.

The narrator’s name is Jonathan Wright, like the author’s. The story begins with Wright’s early childhood and high school challenges. But most of the action occurs after the protagonist is drafted into the Army during the Vietnam era, where he takes on a larger-than-life persona.

Only three days into basic training, for example, he defies bullies who are harassing others in the unit. Learning they are likely to exact revenge on him on a certain night, he crafts a dummy to take his place in bed. The dummy receives a pummeling, rather than Wright. He continues to best his nemeses at every turn. Another time, he wriggles out of a possible court martial for having liquor in his locker by sneaking into the captain’s office where the contraband has been stashed, gift wrapping the bottles for each of his superiors, and fast-talking his way out of the problem.

Wright’s boldness earns the admiration of a general (reportedly, the general thinks he’s “the ballsiest person he has ever met”) who offers him academic opportunities and specialized assignments. Eventually he’s assigned to Berlin, and the story ends with Wright verging on becoming a spy.

The book reads more like a memoir than novel. (The back cover notes that the author’s life “nearly parallels” that of his protagonist). There’s little plot; rather, the story is a series of episodes involving Wright.

The protagonist’s relentless boasting about his outsized antics can become tiresome, and the story lacks the narrative tension of a novel. Still, it’s peppered with amusing hijinks, and Wright includes jokey asides, such as when he uses purple prose to wax nostalgic about a childhood home, noting: “God, I do enjoy flowery speech.”

Overall, readers will find Wright an amiable companion whose adventures are largely entertaining.