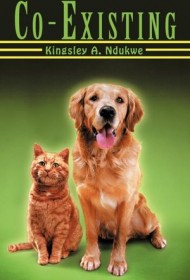 Author Kingsley A. Ndukwe is a student of behavioral science who says he wanted to do something different: write about animals instead of humans. In Co-Existing, he promises readers a recipe that will help owners of dogs and cats integrate both species into their home.

Co-Existing is a short book, with most of its 50 pages filled with general information about the origin of cats and dogs. Ndukwe also includes brief descriptions of breeds, but his list unfortunately leaves out more than it includes. (Under “Types of Dogs,” for example, Ndukwe singles “The Pit Bulls,” “The Collie, “the Irish Red Setter,” and an inexplicably odd list of nine other breeds, with no explanation as to why he chose those breeds over others.)

Finally, on page 42, Ndukwe offers his first insights into creating a harmonious home for cats and dogs, suggesting that it’s best to introduce them when they are young and to allow them to familiarize themselves with each other slowly. Ndukwe goes further, introducing a 2008 study from the University of Tel Aviv Department of Zoology that suggests adopting a cat before a dog. The author seems to borrow from this study freely, but doesn’t extrapolate the study’s findings to allow for his own conclusions.

Co-Existing offers up some interesting trivia about the ancestry of dogs and cats, but readers who are looking for that promised recipe of carefully mixing the two will be left hungry. Like dangling a bone in front of a nose of a hungry dog, Co-Existing makes tantalizing promises. But it doesn’t take readers long to feel as if the bone has been pulled away, leaving little in its stead.