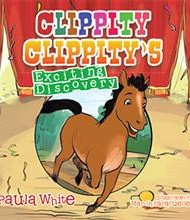 Paula White’s picture book revolves around a young horse who longs to become a circus performer but must first conquer his self-doubts and discover his talents.

The story opens with Clippity watching with pride as his mother, Bright Star, performs in a circus act. But when stern circus master Mr. Cross pushes Clippity to demonstrate a skill of his own, such as counting to 3 with his hooves, Clippity comes up empty. “Ha. Ha. You’re no good,” taunts Edward Emu, one of the circus animals. But Bright Star urges her son to trust in himself and offers an encouraging song: “If you think you can’t do something, give it a try, give it a try, give it a try.”

Soon, Clippity discovers that he can tap out rhythms with his hooves and even somersault in the air. Excited by this unusual skill, Mr. Cross gives Clippity a chance to perform, and the horse’s final challenge comes when he conquers stage fright by remembering his mother’s ditty.

In a book enlivened by Marvin Paracuelles’ colorful illustrations, readers encounter encouraging messages about conquering doubt and discouragement. But some flaws exist. Clippity’s statement, “I think I can do it. I think I can do it…” is uncomfortably close to the “I think I can, I think I can… ” of The Little Engine That Could. It’s also jarring to suddenly see Clippity – who hasn’t spoken to humans throughout the book – asking children questions at the end. In addition, copyediting errors abound (including dialogue that isn’t broken out from paragraphs of narrative, improper punctuation, and inconsistently calling the horse by one or two “Clippity’s”). Finally, the narrative is extremely text-heavy, which can be daunting for a young audience.

Despite all, this book offers a positive and engaging message, and children will relate to the Clippity’s dilemma. While the tale has an unpolished feel, young elementary school children might enjoy the young horse’s ultimate triumph.