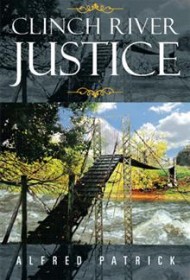 In the novel Clinch River Justice, the year is 1942 and newly minted deputy Charley Scott is called to the scene of a suspicious death along Clinch River near the small town of Creedy in the Appalachians. Crime is a rarity in the predominantly rural community, but a sudden rash of mysterious deaths has the sheriff’s department scratching its head. The professional becomes personal for Scott when his favorite aunt dies a quick, violent death.

Despite initial appearances, this is not a crime novel. The murders are merely the backdrop for the folksy story about Scott and his family. It’s as if Sheriff Andy Taylor has invited folks to set a spell while he tells them a story.

The author, who grew up in western Virginia, does a wonderful job of creating a sense of place. The book often feels more like a memoir than a novel because of the author’s familiarity with his subject and his ear for dialogue, which smacks of someone who really knows these people. Example: “Charley chewed and swallowed a generous forkful of cake and said, ‘umm, umm, Aunt Luce, you still make the best cake I ever tasted.’ Lucille sat quietly, just enjoying having her nephew near her.”

The characters are slow in putting two and two together, and the story meanders along until all the pieces fall neatly – too neatly, it could be argued – in place. The characters aren’t particularly heroic or smart; that’s the book’s beauty as well as its downside. These are ordinary folks: some good, some bad; some likeable, some not so much. The events unfold lazily; there is no sense of tension or suspense.

If you’re looking for something hard hitting, this isn’t for you. But if you want to be transported to a simpler time, the book goes down as easily as if you were a-settin’ on the porch, enjoying a glass of Aunt Bea’s lemonade.