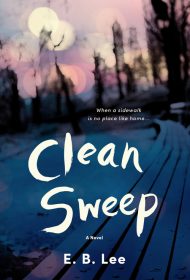 Clean Sweep brings the plight of the homeless to light through the eyes of Carli Morris, who initially volunteers with a church organization and later joins an outreach program. Thus begins her evolution from a passerby who ignores street people in need to an active participant involved in generating change.

Carli is recruited for the outreach organization by Grant, someone who knows and is known by many living on the streets. There’s something familiar to Carli about Grant, and her exposure to the homeless evokes memories of her brother, Henry, who years ago lost touch with his family despite efforts to locate him.

While set in New York City, the story could take place anywhere in the country. Ill health, extreme weather conditions, alcoholism and fear of losing one’s independence are among the problems faced by those Carli and Grant try to help. The results of their efforts are as varied as those they meet.

Carli, a newly retired advertising exec looking forward to traveling, is also a painter preparing for an upcoming exhibit. These plans lose their priority the more involved she is with the homeless and with Grant, who she begins to suspect might be Henry. Just as Carli’s perspectives change, so does Grant’s personality, which leads to some harsh realizations: Even those who help need assistance.

Author E.B. Lee writes in a straightforward way that’s vivid and authentic. Among the novel’s many strengths are the smart, relatable main characters. The homeless are portrayed as individuals not as a homogenous group. The issues associated with homelessness are addressed in a sensitive manner without judgment. Mental health, loss of loved ones and lifestyle changes are among the factors identified as contributing to the problem.