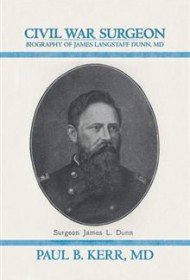 If what is expected is a narrative of an individual’s life, Dr. Paul B. Kerr’s subtitle is somewhat misleading. Instead of a biography, Kerr has supplied a running commentary on 140 letters Dr. James Langstaff Dunn, a Civil War surgeon, wrote to his wife and family. Although Kerr’s comments are always illuminating, they do not amount to a biography.

But anyone interested in the Civil War, the development of modern medicine, and the eyewitness testimony of an observant, decent, and admirable participant in history will be intrigued by this book. Its episodic structure lends itself, as well, to reading in short spurts, which might prove especially appealing to those uninterested in all the minute details of a biographical subject’s life.

Dr. Dunn. a surgeon of the 109th PA Volunteers of Infantry for three years, saw action at the battles of Gettysburg, Chancellorsville, Chattanooga and Atlanta. He watched President LIncoln visit the tent city of troops outside Washington, D.C. He named Clara Barton “The Angel of the Battlefield” and engaged in exhausting efforts to help the women and children in the burning of Columbia, South Carolina.

Author Kerr displays considerable judgment by never getting in the way of the drama the letters themselves display. Here, for example, is Dunn’s description of a runaway slave: “I picked up a nice smart little contraband as black as jet on the march near White Plains, VA. He is smart as can be, can cook and do almost everything. His master was hunting him to send him South but he hid in the woods until eve came along and I picked him up. He is about 12 years old and says that if I will learn him to read & rite, he will go home with me and work for me the rest of his life.” It is a poignant moment–all the more so because, as Kerr notes, Dunn’s reaction is free of some of the racist assumptions about slaves common among Northerners then.

There are many more such dramatic moments in a life and time now well preserved in Kerr’s valuable book.