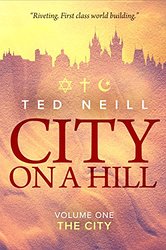 This post-apocalyptic cautionary tale follows the remnants of humankind after a nuclear disaster known as the Cataclysm, delivering an undeniable page-turner that explores some weighty topics, namely the insanity of the prejudice, hate, and bloodshed that has followed organized religions for millennia.

After the Cataclysm, all that’s left of humankind lives in two cities that have been rebuilt from the ashes of the former world: Lysander and Fortinbras. Having learned from the mistakes of their ancestors, the new society begins again with some new precepts. First and foremost, they believe that religion is a disease. “There is a wasteland out there, a ruined planet, and billions of graves that faith produced.”

The story revolves around the relationship between two lifelong friends, Sabrina and Lindsey. Sabrina is a cadet with the tyrannical Security Ministry while Lindsey is the polar opposite: a free spirit who enjoys painting and frequently experiences precognitive visions. Sabrina’s job includes ferreting out “occultists” from the atheistic society—but when she finds her best friend at an underground meeting of revolutionaries, she begins an unwilling journey of self-discovery that leads her and Lindsey to the desert wasteland and the subterranean stronghold of a community of Believers. What Sabrina finds there turns her world upside down.

A highly palatable fusion of Walter M. Miller, Jr.’s seminal post-apocalyptic classic A Canticle for Leibowitz and James Dashner’s Maze Runner saga, this story has it all: a brilliantly intricate storyline, brisk pacing, bombshell plot twists, and well developed characters. The only element lacking is the thematic brass knuckle punch at novel’s end, which could have vaulted it into the category of post-apocalyptic classics such as the aforementioned A Canticle for Leibowitz and George R. Stewart’s Earth Abides. Neill’s thematically profound ending was missed. Nonetheless, City on a Hill is a tour de force that will satisfy any fan of post-apocalyptic storylines.