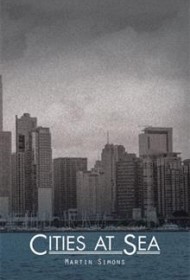 Martin Simons offers an intriguing vision of a dystopic future in Cities at Sea.

Set thousands of years in the future, Cities presents a planet Earth ravaged by the impact of climate change, war and desolation. Three-quarters of the planet is covered with water; the world’s population centers are essentially navigable cities held afloat on rafts. Orwellian authority figures keep track of every citizen via wrist terminals.

This setting serves as the backdrop for the central story. Sal is a young woman from the Sydney raft who’s looking for a fundamental transformation, a way to escape the bleak world of floating cities and central authority figures. She connects with Jezzy, a scientist who has discovered a way to genetically modify humans so that they can breathe underwater.

That basic premise offers plenty of potential intrigue. Simon’s narrative vision seems to be to meld the work of George Orwell and Aldous Huxley with the grittiness of the Mad Max film series and the basic dynamic of the ill-fated film Waterworld.

Unfortunately, the author has a hard time moving from a promising premise to an effective and compelling story. The focus of the book veers from Sal’s travails to stretches focused on the floating cities themselves, and Sal’s quest to find a new world never fully finds its impact. Simons’ narrative style is clinical to a pernicious degree – the dry prose and simplistic sentence structures (“It was a brief meeting. The verdict was settled.”) fail to bring the action alive or give readers any true attachment to the characters.

The unfortunate result is a book that fails to fully exploit its potential. While Simons offers a well-researched view into an interesting, albeit depressing, future, the author fails to turn that promise into a truly compelling story. Fans of dystopian science fiction may find worthwhile moments here, but many will have a hard time persevering past the first few chapters.