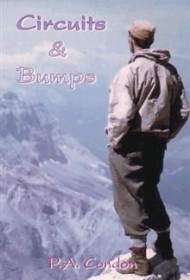 P.A. Condon’s literary gem of a memoir, written at age 80, shares sensitive details of his hard-scrabble life with the deft story-telling of Frank McCourt and a healthy dose of Julian Barnes’ keen wit. His reminiscences uncover an emotionally vulnerable childhood and a deep love of family, books, music, mountains, flying and teaching.

The book opens with an amusing explanation of being named Philip, yet christened Philip Alfred. “The discrepancy, my mother told me, was due to beer,” after his alcoholic father downed several celebratory pints. From here, Condon’s sparkling conversational anecdotes and colorful language romp through occurrences good and bad.

He was evacuated from London in 1939 and sent to live with strangers. Then as the Battle of Britain began, he and his sister rejoined their mother in North Wales, where he happily discovered the joy of mountain climbing and found himself “emerging from childhood like a butterfly from its chrysalis–not a fine Swallowtail, perhaps, but at least a Small White.”

After joining the Royal Air Force and failing to qualify as a pilot (“too forgetful”), he moves to Canada and later hitchhikes from Halifax to Edmonton, scraping by on minimal food and shelter. He eventually finds gold mining work – and Jan, the “bright spot” of his life, who tragically dies two years after they wed. Soldiering on, he completes university and inspires minds of secondary level students for 26 years at schools in Vancouver and later London. The book closes with highly personal letters to friend Gerry, where the author admits to having fought through emotional breakdowns in his solitude.

Condon’s intelligent memoir has a novel’s flair and is further enhanced with photos, his personal, well-crafted poetry, and appropriately placed quotations from prominent writers. In recounting his time in a children’s shelter, Condon references Blake: “And because I am happy and dance and sing,/ They think they have done me no injury…”

The author’s gifted writing and emotional honesty make this book a winner.