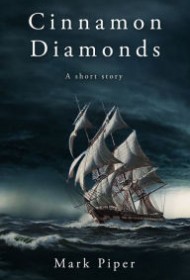 Mark Piper’s delightful short story, Cinnamon Diamonds, is a fictionalized account of the real-life seafarer, Capt. Hanson Gregory of Camden, Maine — the man who ingeniously invented the modern-day doughnut in 1847.

The tale begins in March 1916, at the Sailors’ Snug Harbor in Quincy, Massachusetts, a home for retired mariners. John, a reporter from The Washington Post, arrives to interview Capt. Gregory about how he transformed “cinnamon diamonds” — an indigestible fried-dough pastry prepared aboard ship to curb seasickness — into the world-famous sweet treat known as the doughnut. As the captain commences, the retirees gather to listen to the now octogenarian’s adventurous and intriguing yarn.

Piper’s eight-page narrative is limited mostly to Gregory’s reminiscences. Characters are insubstantial, appearing in only one or two sentences, and even John feels tangential to the story’s arc. Its narrow perspective and lack of character development are missed opportunities for comprehensive storytelling.

However, Piper’s vivid prose gives Cinnamon Diamonds a major boost. Quincy‘s winter chill is unmistakable, and a sailor’s fear during a hurricane at sea is precise. Piper’s depiction of the retirees’ slow-moving shuffle echoes quiet dignity: “The clack of walking sticks on stone and the shamble of slippered feet shadowed the seamen.” And the portrait of Gregory is eloquent: “[He had]…wispy hair poking out from under his watch. Small round glasses framed his face with a grey-running-to-silver beard adorning his chin.…He walked… with a bandy-legged gait honed from years of negotiating rolling decks slick with brine.”

Piper is a talented writer, and Cinnamon Diamonds is a worthy short story. Admittedly, it is curious as a standalone piece of writing, as it feels like it belongs in a collection and leaves readers wanting to turn the page to begin the next story. But that might change down the road. “The fun has just begun,” Piper writes in his dedication, hinting that readers may soon get what they wish for.