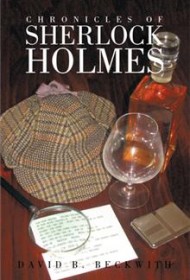 Spurred on by admiration, envy or obsession, scores of authors have sought to expand the Sherlock Holmes canon since its characters entered the public domain. Retired Australian info-tech specialist David B. Beckwith’s effort is competent and respectful, if not as inspired as some might wish.

In these five stories, Beckwith admirably packs in some classic detail—from cocaine to magnifying glass to evil Moriarty—and he manages passable reproductions of the legendary detective’s Victorian hauteur (“When you return, I shall reveal all”) and Sir Arthur Conan Doyle’s starchy diction (“And so Earl Edwin made ready and we departed for London leaving our wives to act in our stead”).

What Beckwith lacks, as do most Doyle imitators, is the spark of ingenuity and the dark, dry wit that ignited the original 56 stories and four novels. This Aussie’s Holmes may solve the case, but he doesn’t advance the style.

Beckwith’s tales have supposedly been unearthed by Dr. Watson’s great-great grandson James and “published” at long last. Three of the pieces take us north to Edinburgh, where boozy Laird MacDougall is found hanging dead from a ceiling hook in a locked cellar; then on a visit Watson and Doyle himself pay to a shady London fortune-teller named Madame Sybilline Fiducie; and, finally, into the fog-shrouded realm of Jack the Ripper, who confronts Holmes with his glinting knife. Naturally, the unflappable sleuth responds with a rapier concealed in his cane.

In the longest and most engaging story, “The Colonial Conspiracy,” Holmes and Watson get embroiled in sensitive 19th-century matters of state involving Western Australia, New Zealand and Fiji, an adventure enhanced with murder most foul, a chloroform-scented pillow and a nicely-drawn scene at Baker Street where the long-suffering Watson must endure as “Holmes scraped upon his violin.” Very atmospheric stuff.

As with most things, these copies are no match for the originals, but they provide frequent enjoyment. Holmesian “completists” might consider adding this slender volume to their shelves.