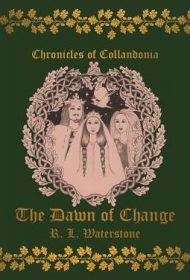 In this first entry in the larger Chronicles of Collandonia series, Dawn features the expected magic, monsters and mysticism of any standard fantasy: Dragons, dwarves and otherworldly powers are all part of the landscape here. These elements, however, are secondary to the very human political struggles and emotional drama that undergird the main storyline. Indeed, Waterstone’s major strength is her knack for creating winsome and engaging characters, figures that defy the stereotypes of the genre with their depth.

When Kellup succeeds his father as king of the realm of Voerlow, he sparks a series of political stratagems that have epic consequences. Kellup sets his sights on the realms neighboring his own, ultimately plotting to seize power from King Holden of the kingdom of Xelphea. The disappearance of Xelphea’s Queen Delshanna, as well as the Royal Governess AnnaLusia, plays into the evil king’s plan, and it falls to a cast of unlikely heroes, including Kellup’s exiled brother Prince Steff, to recover the missing and foil Kellup’s larger, evil plots.

Waterstone uses these political plots as a springboard to sketch out a richly imagined world. While the author occasionally falls into the tropes of the fantasy genre—the character of King Kellup, for example, is an almost cartoonish take on a storybook villain—she also manages to create vivid, relatable personalities. Prince Steff, for example, is an affecting and engaging character, as is AnnaLusia, an ancient seer from a race of healers, advisors and professors who sees the ties between Kellup’s plots and ancient prophecy.

These characters help bring an otherwise standard fantasy tale to life in an interesting and engaging way. Longtime fantasy fans may feel like they’re navigating some familiar conceptual territory with this book, but the text offers hints of narrative innovation to come from an able and competent author.