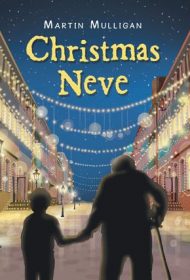 Neve is looking forward to spending the day before Christmas watching holiday movies and helping her mother bake. But a call from Grandad Jack, saying he needs something for Christmas and wants to go out, changes her plans.

Grandad Jack is old and needs assistance to walk; Neve and her family take him to a department store for the day. Initially reluctant, Neve has a great time with Grandad Jack as they explore the store and learn more about each other. All the while, Neve tries to find out what it is that grandad needs. Decorations? she wonders. Presents? In the end, Grandad admits that what he needed, his greatest present, was simply to spend time with Neve.

The book is written in rhyming verse, which is generally solid (although some rhymes are a bit of a stretch) and occasionally delightful. But the story’s best element is its characterizations. The progression of Neve and Grandad Jack’s day is natural and convincing, with Neve’s lack of enthusiasm quickly giving way to genuine interest in her grandfather. When Grandad tells Neve that he once played in a band, Mulligan writes: “Neve grinned at the thought of her grandad so young,/ And she asked what he played and what songs he had sung.” Each stop they make at the mall brings them closer together in some way.

The book’s art is engaging, capturing realistic facial features and other details. Even two back-to-back illustrations showing Neve and Grandad Jack with Santa don’t seem repetitive, as the unchanged elements direct more attention to the changing facial expressions of the characters, the true focus of the pictures.

Christmas Neve is a tender, well-told story that would make an excellent gift for young children—or their grandparents.