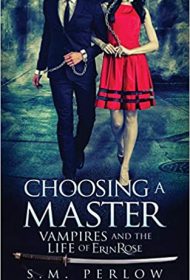 This dark fantasy, a prequel to the Vampires and the Life of Erin Rose series, tells the story of two warring vampire factions in an alternate universe where vampires live freely among humans. Absorbing and disturbing, the book delves into potent themes of religion, politics, and morality.

The vampires inhabit two groups at war with each other: Sanguans (who feed off human blood) and Spectavi (who drink synthetic blood to avoid harming humans). While Spectavi appear to be the good guys, readers learn that one of their leaders hides dark secrets. Likewise, apparently evil Sanguans can occasionally be honorable and of high integrity.

The story is told through the eyes of three characters. Ethan, a Sanguan with a comatose girlfriend, will stop at nothing to find her cure. Vera, a human chemist for the Spectavi, experiments with a synthetic blood that can alter Sanguan behavior. John, a human, looks for love and adventure, but winds up with something much darker when Sanguans discover that his rare blood is rich, yet pure—an irresistible nectar to Sanguans, a research tool for Spectavi, and a miracle cure for ailing humans. As news spreads around the world, John’s blood becomes a sought-after commodity.

Carefully plotted and compellingly written, this book succeeds as a supernatural tale of suspense and study in morality. Book clubs could talk for hours about the compromises presented and the difficult choices characters make. The scenes with vampires feasting on their prey are written with powerful and affecting sensuality.

The book can also be amusing, such as when Ethan asks a young woman: “Have you ever been bitten by a vampire?” She answers with an understatement intended to make a good impression: “A couple of times. Years ago. In college.”

This novel delivers everything readers expect from a dark fantasy about vampires: a fascinating new world, characters worth caring about, and thought-provoking themes, all wrapped within an enthralling story.