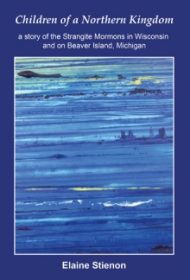 Author Elaine Stienon has chosen to craft a novel out of a particularly convoluted and largely forgotten bit of 19th century American history. Her story involves the the Mormon Church’s split into factions following the murder of its founder and original prophet Joseph Smith, one led by Brigham Young, who practiced polygamy and headed for Utah, the other led by James Strang, who rejected plural marriage and eventually ended up on Beaver Island, Michigan.

The novel follows this latter group to the island, concentrating on a small set of families mostly following the lead of Gabriel Romain, a doctor and blacksmith, as its members struggle to come to terms with the changing landscape of their lives. And change it did: Strang declared himself king of the Beaver Island community, took multiple wives, thus violating one of the main reasons behind the Mormon schism in the first place, and was finally assassinated while his followers were driven from the island and scattered by vengeful and intolerant “gentiles.”

Stienon, who has written several previous novels based on the story of the early Mormon Church, skillfully blends this plethora of historical events in all their confusing detail into her story, making them work smoothly as elements of her fiction. She should be heaped with praise for holding the many strains of the story together so adeptly. Her characters—man, woman, white, black, Native American, Strangite, or Roman Catholic—are all well-drawn and strong enough to resolutely drive the plot forward.

Although some might find the resolution somewhat glib and improbable, none can deny its possibility. What we are left with, at the end, is a fine account of a neglected slice of the past, as well as a remarkably tight and well-told novel.