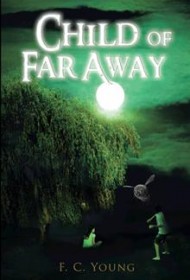 In Child of Far Away, F.C. Young’s debut story that appears aimed at middle-grade readers, a young girl and her family adjust to life on a new Eden-like planet but then find themselves in a complex battle with deadly creatures that threaten to destroy them.

Set in the future when interstellar travel is common, Cassie, her younger brother Jamie and her scientist parents, along with 19 other families have landed on Florabal, a lovely, Earth-like planet. Here, the life-forms they encounter have extraordinary powers: giant bee-like creatures create a honey with astonishing healing properties, and trees communicate telepathically with humans. But the colonists’ peaceful existence is soon shattered and a tree warns Cassie about an impending disaster. Strange, worm-like creatures with big teeth and voracious appetites for all living things are about to attack and destroy the planet.

The planning process that goes into defeating these rapacious monsters drags on far too long and is sufficiently convoluted that readers might have a difficult time sorting it all out. But it’s the dialogue and characters that are the crowning gems here, rather than the plot itself.

Young has done a marvelous job of creating well-rounded characters, and readers will be especially charmed by Cassie and Jamie’s genuineness. And although the telepathic “conversations” between humans and plant life are stilted, too lengthy and numerous, the talk among the humans is marvelous; lively and flowing, with welcome bits of fun, kid-appropriate humor, it smoothly and ably propels the story forward.

The cover is striking, original and enticingly surreal. But readers may be disappointed by the markedly dissimilar black-and-white interior illustrations, some with minimal detail and crudely drawn figures.

Despite the book’s flaws, many young sci-fi lovers will likely stay the course, anxious to see how these two very loveable siblings fare in this battle.