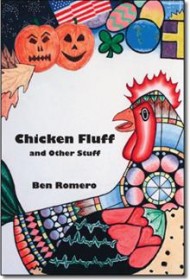 Chicken Fluff and Other Stuff is author Ben Romero’s seventh book with “chicken” in the title. Like a similarly poultry-themed series that also involves soup, this book collects short stories and anecdotes from a variety of authors, this time with holidays as the common theme. Some are funny, some sad, and all combine nicely.

Helen Johansen relates a funny tale of visiting her in-laws on July Fourth. Accompanying them to a livestock auction, she stretches at the wrong time and accidentally bids on nine Black Angus cows. Hitoshi Yamada describes a meager Christmas spent in a World War II internment camp that was made brighter by a modest celebration and donated gifts, including soy sauce from the Japanese emperor. And Pedro Romero contributes a raunchy story from basic training, when he decorated a stool sample with Mr. Potato Head parts and had the medical staff in stitches.

The writing is casual and friendly; many of the contributors were in the same memoir class, and there are stories from multiple members of the same family. There’s a sense of fun and camaraderie in the stories. Some tie together, while others are simply anecdotal sketches. The mix of holidays, from Day of the Dead to Easter, Christmas and Halloween, is a surprising advantage: it’s easy to get bogged down in Santa stories, but not when they’re tossed in with egg hunts, haunted houses and the odd birthday cake.

Romero has his formula down, and Chicken Fluff is refreshing for its multicultural stories and cheerful outlook. Here’s hoping his arroz con pollo siphons off a few sales from those other chicken anthologies.