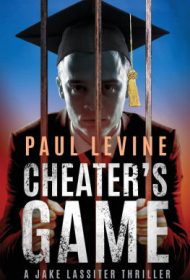 The insanely smart 20-year-old Chester “Kip” Lassiter has an ethics deficiency. He can easily nail the SATs with perfect 1600s. And if perfection isn’t the goal—say a 1350 is more credible—he can deliver whatever score is needed. Ignoring Uncle Jake’s advice—“Never sacrifice your integrity for the pursuit of money” —he works for the sleazy Dr. Max Ringle, taking rich kid’s tests for big bucks and raking in oodles of dough. “Twenty-five grand for four hours’ work!” he marvels as he floors his Tesla X.

Meanwhile, Jake is an attorney and a retired NFL linebacker who may have a fatal brain disease in his future. Jake raised Kip because Kip’s mom “was too busy bouncing checks and jumping bail to catch the name of the kid’s father.” So when the Feds come calling, and Kip faces numerous “fraud, racketeering and money laundering” charges that could land him in prison for most of his life, Jake becomes his nephew’s defense attorney, despite his own failing health. “I had a stake in the boy’s future that no one else could match,” he notes. As going after Ringle becomes part of the trial strategy, the story offers a fresh twist readers won’t see coming.

Fourteenth in the author’s Jake Lassiter series, Cheater’s Game is immensely enjoyable storytelling with crisp and clever dialogue and convincing courtroom scenes. In chambers, the judge pulls the knot of his tie “to half-staff, and two hidden chins wriggled free.” Jake must do his best despite his worsening brain condition: “I got a little dizzy in court today,” he tells his fiancée. Later, his “migraines had hatched baby migraines, and the judge’s chambers were spinning.” With more talent than modesty, he’s a most sympathetic and engaging protagonist.

Grisham fans will love this one. Paul Levine spins a fine yarn.