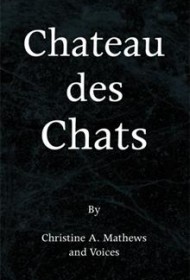 There is certainly no lack of imagination in Christine A. Mathews’ quirky – at times crossing into hallucinogenic—tale about a collection of traveling cats and their adventures in the big city. Part The Incredible Journey, part Richard Scarry, her Chateau des Chats teeters between charming and bizarre – with the nod going to the latter.

The story opens with the introduction of a cat named Ris, who flees the safety of her family to embark on a mission to tell other cats not to kill birds. She quickly joins forces with two other felines, and they all set off for an adventure in New York. There are numerous other cats that fade in and out of the storyline along with some humans who provide the counterpoint of goodness and evil.

Mathews is a creative writer. She does a fine job of crafting distinct personalities for her feline friends, but she is also her own worst enemy. There are too many characters and too many disjointed plotlines as she seems to try too hard to be evocative. The book quickly becomes a stew as cats jump from being drunkards in the alleyway to costumed dancers to mellow kitties mewing and batting at yarn. The point of view similarly hopscotches as it shifts from cat to author. Readers suffer whiplash trying to sort everything out. It’s a shame because had she pared down the structure, it could have been a sweet parable about the pull between belonging and independence.

Mathews states in her introduction that she wrote the book while involuntarily committed to a mental hospital. She even credits “and Voices” as her co-author. Certainly many authors have suffered from personal demons, and she is to be commended for being so upfront. It may explain the book’s fantastical nature.

Still, for all that she was trying to do, a book needs to serve its readers, and this one ultimately falls short.