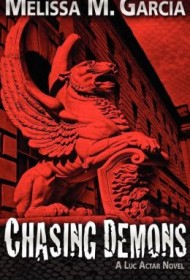 The title of Melissa Garcia’s latest Luc Actar thriller has a double meaning. Actar is chasing demons both outside and inside his head. The demons appear to be winning.

Actar has an active loathing of the police that pre-dates his current job reporting on police corruption for a Los Angeles newspaper. He had spent his youth on the streets barely avoiding starvation while trying to keep himself safe from his alcoholic, con man father. Later, he learned to boost cars and other activities that brought him in contact with the law.

Now Actar has anger issues, and when he arrives at the house he shares with his girlfriend and finds the police inside, he loses his cool and assaults an officer. He learns the cops have come to tell him of his father’s death from cancer. He then asks himself why it would take several detectives to deliver the news.

Uninterested in his father’s death, Actar is after a story, and the police have piqued his curiosity. He discovers that before his father’s death, his father had managed to acquire the medical records for a friend who had been forced into a mental health facility. Actar believes someone is making money by institutionalizing the homeless and charging the state.

As his investigation moves forward, he finds himself losing all that he holds dear. And through it all, a psychopath is getting closer to Actar and the few he cares for.

Garcia writes some finely conceived scenes, and the tale moves briskly, never allowing readers a moment of disbelief in the fiction. The author has a keen sense of place reminiscent of Southern California noir writers such as T. Jefferson Parker. One quibble: Actar is so mad at everyone, including himself, that readers will want to shake him and tell him to lose the attitude. But that simply means that we care, and such concerns aside, readers will remain engaged with Chasing Demons.