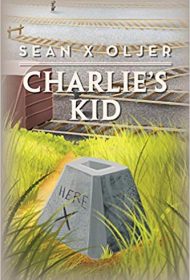 As a toddler, Oljer’s mother told him, “You ruined my life.” When he was four, she left his doting father, a man who loved his child but abused her, and made a calculated trade, opting for someone who abused her child, but not her.

For years Oljer, his mother and her lover, Seth, drove across the country grifting and stealing, with the nervous little boy who couldn’t help wetting himself in the backseat. Seth punched and slapped him mercilessly, telling him repeatedly that he was worthless—a belief the author could never shake. Despite their hatred, they kept the child with them (something, oddly, that Oljer never explains or questions).

Eventually deserted by Seth and his mother, Oljer, not yet a teenager, began moving around Chicago, sleeping in squats and working odd jobs. When he met Charlie, a homeless vet, he found his protector and guiding light. Charlie taught Oljer how to survive on the streets, and, more importantly, to be an honorable man. Throughout life, Oljer lived by the rules Charlie conveyed. He was “Charlie’s kid,” as other homeless men and women called him, and he grew up to raise his own son the same way, happily seeing him enrolled in college.

Early in the story, the author “speaks” in a childish voice but uses more mature language as he ages, subtly rendering his account more real. His characterizations of individuals he met are skillfully drawn and fully realized. Some may find the story, told conversationally, too heart-wrenching to read. But despite Oljer’s terrifying litany, most will be drawn in, anxious to learn the outcome.

Oljer still fights to overcome his demons daily, a struggle that commands our respect. For all its horror and despair, Charlies’ Kid is an inspiring tale about redemption, kindness and nobility.