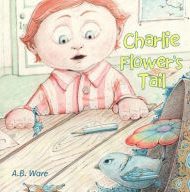 In this creative, sensitive children’s picture book, a young boy discovers a strange bird who transports him to another world.

Peter is shocked when his giant chocolate Easter egg cracks open to reveal a blue bird with a flower for a tail. The bird, named Charlie, explains that he comes from a land “between the Indigo and Violet of the rainbow.”  He tells Peter that he’s come to live with him, but before explaining why, his flower tail changes into a swirl of color, hypnotizing Peter. The boy is sent into Charlie’s world, where everything is blue. There, he meets a flying cat, saves a flightless bird, and eventually falls from a tree and back into his bed at home. The book ends on this cliffhanger, with Peter wondering where Charlie has gone and what will happen next.

Charlie Flower’s Tail strongly resembles Alice in Wonderland. The writing utilizes a similar voice and tone, and the magical elements are creative yet familiar. Readers will see elements of the Cheshire Cat in the grinning, flying cat who appears several times to tease Peter, but Charlie, with his fantastic tail, feels wholly original. Peter is a relatable and likeable character, with a curious but practical streak that makes him a winning protagonist for young readers.

Despite its many attributes, however, this portal fantasy seems a better fit for middle-grade readers. The story feels more like a serialized novel than standalone picture book (at story’s end, the plot’s overarching questions remain unanswered, and it seems that there are more adventures to come). Meanwhile, the book is text-heavy for a picture book, and the complexity of both diction (e.g. “bedraggled”) and sentence structure is too advanced for most beginning readers. Additionally, the text requires a professional proofreader to correct punctuation mistakes.

Despite such issues, Charlie Flower’s Tail is an enchanting and inventive story. Repackaged in a chapter book format for middle-grade readers, it would likely be a hit.