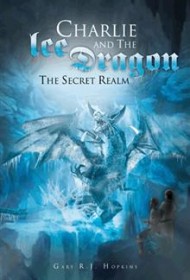 In Charlie and the Ice Dragon: The Secret Realm, Gary R.J. Hopkins delivers a narrative that is set firmly in the boys’ adventure/fantasy tradition. The plot’s overall trajectory – boy is bored, longs for adventure, finds adventure galore, discovers he has a powerful and surprising role that puts him in danger in a fantastic world – is nothing new, but as many writers before Hopkins have proven, the secret to success in this genre comes in the details. And there is something winning about the details that Hopkins dreams up.

The book begins with a poorly edited “Introduction” and several following pages set in the “real world” in which the author seems particularly weak at punctuation and dialogue. But readers who stick with the narrative will find that this significantly, if not consistently, improves as Hopkins launches the boys into the fantasy world and warms to his story.

The saga begins when 10-year-old Charlie Travis reluctantly sets out to spend his summer vacation in the care of his grandmother. He dreads a boring time with no playmates but immediately meets and befriends another boy called Peter. Within a day, the two boys discover a magical world in the nearby forest, one where Charlie’s arrival literally warms up the action as a frozen world melts to free a memorable, fire-breathing dragon called Azrimore. As the world continues to thaw, other denizens — ranging from protective tree elves to threatening dark forces — become active, while the boys greet the wonders that they meet with amazement, good humor, some fear, and an admirable amount of courage.

Better editing is surely needed here. But overall, the book is a good-humored, imaginative boredom-buster that leaves readers eager for the next entry in a proposed series.