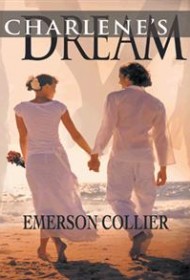 In Charlene’s Dream, Charlene, the novel’s main character, reveals early on that she has suffered her share of tragedies, beginning with the death of her high school sweetheart, Steve, with whom she had made life plans. Despite her sorrow, she eventually meets Joe, who has experienced his own family hardships from the death of a young brother and sister, followed by his mother’s untimely suicide.

As “two lost souls, two hurting people” Charlene and Joe find themselves drawn to each other and soon marry. Joe is loving and attentive until the birth of their daughter, Adriana, who he believes is a drain on their relationship. His anger boils over when Charlene unexpectedly becomes pregnant again with his son, Parker. The situation escalates as Parker grows up to be nothing but trouble.

Halfway through the book, the reader is introduced to another character, Connie, who battles her own marriage miseries. Connie eventually moves to the same town as Charlene, and the two develop a deep friendship because of their shared difficulties.

While Collier interweaves various plots such as these, her novel never evokes from the reader any compassion for the book’s characters. The novel spends too much time explaining people’s actions, rather than allowing us to participate in their lives by seeing them react and interact and to feel for ourselves their intense love and soul-shattering heartbreak. The prose also sags through a lack of original writing. Too often, the author trots out tired phrases such as, “Gino was built like a tank and as strong as an ox,” and “in the blink of an eye.”

Overall, while Charlene’s Dream strives to follow in the footsteps of authors such as Nicholas Sparks, it proves to be slow moving and lackluster. In its current form, it is a very light beach read at best, and one that is easily forgotten.