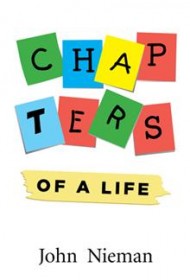 This collection of fictional tales chronicles the life of Charles “Chaz” Conner, starting with his childhood during the 1920s onward through decades of modern history.

While the book begins with the marriage of Lucy and Jack Conner, it quickly becomes Chaz Conner’s story as he discovers baseball, enjoys his first infatuation and enlists to fight in WWII. He loses his father early on, but he and his mother share a powerful bond, and despite the Great Depression, war and other difficult times, they generally thrive on love and a positive outlook. As a young man, Chaz finds his calling in journalism, a career that puts him on the frontlines of many of the most significant moments in modern history, as well as giving him access to famous men and women, including JFK. When he marries Leah, the reception “was the place to be for Chicago glitterati.”

Author John Nieman describes the book as a collection of short stories, but it reads like a continuing narrative, moving in chronological order from the beginning of his life to the end. The writing is straightforward and clear and includes point-of-view shifts, from third person to first when the author steps in to offer his thoughts. “Must one be young to be ‘smitten’?” he asks at one point, adding “I hate to depart from the narrative here…” While this conceit works at times, the shifts can also be jolting.

Taken as a whole, the stories lack a clear engine to pull readers forward. With the exception of some low moments, Chaz generally lives a charmed life and there is little narrative tension. The book tends to read more like a memoir—albeit about a highly glamorous life that only a few real-life journalists can claim.

Overall, the collection is likely to be most enjoyed by readers with an interest in modern history and the life and times of a journalist operating in a golden age of newspapers.