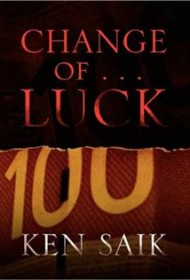 Ken Saik’s novel, Change of…Luck, introduces readers to Jerry, a nice guy looking to impress his girlfriend on a dinner date. When the check comes, he’s caught short; his wallet is missing. Panicked and at loose ends, a stranger comes to his rescue with a $100 bill on the simple condition that Jerry return it.

It seems too good to be true, but he’s in a bind and takes the money. When the same crumpled bill keeps finding its way back into Jerry’s wallet no matter where he spends it, he’s accused of theft and trickery, and at one point is beaten up. It seems our hero may be cursed. But how can he give the money back when his benefactor, the mysterious “Rich Howard,” has disappeared into thin air?

Saik has taken what he calls a “campfire story” and expanded it here. At 51 double-spaced pages this is still a short story, but the characters and locales are vivid and the plot grabs hold quickly. At one point, Jerry meets girlfriend Jessica at a jewelry store and a pushy salesman pressures him to buy her something he can’t afford. Saik’s portrayal of the hard-sell, Jerry’s resistance to it and his ultimate cave-in create a pressure on the page that readers can feel directly.

Saik’s writing is easy and light; while not dense in details, he sketches settings well and captures the easy friendship among coworkers in a few conversational strokes. The story’s conclusion comes a bit abruptly; if Saik had foreshadowed some of the information revealed there, the solution to Jerry’s dilemma might feel more natural and less tacked-on, but that’s a minor quibble. Change of…Luck is like an Ambrose Bierce ramble or O. Henry tale, full of twists and enjoyable throughout.