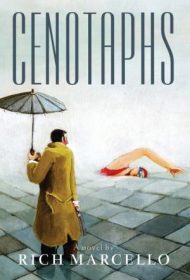 Cenotaphs by Rich Marcello is a literary novel about an unlikely pair of people finding redemption in one another.

Ben Sanna is an aging retiree living in a remote cabin outside tiny Hasman, Vermont. His childhood was marred by family violence and his adult life scarred by a disintegrated marriage and staggering personal loss. Now in his twilight years, he spends his time trying to help people. A practiced listener, he takes on the role of informal therapist to people in Hasman while they grapple with addictions, domestic problems, and private disappointments.

Samantha Beckett is a 40-something Wall Street businesswoman who hides behind layers of emotional armor, distracting herself with men while keeping them all at a distance. She’s beautiful, intelligent, assertive, and seemingly unknowable.

When Samantha makes a chance stop in Hasman and crosses paths with Ben, she feels an inexplicable connection. Impulsively, she visits his cabin, where she experiences a rare moment of vulnerability that ultimately opens the door for each to share their dark secrets with one another, culminating in a soulful expression of commitment between them that defies conventional friendship and transcends romance.

Cenotaphs unfolds organically, the reader hit by each wave of character revelation until submerged in their trauma. It’s a powerful monument to forgiveness and the struggle to accept one’s self. Each character is well-drawn, and it’s a testament to Marcello’s skill that he can voice feelings which, for lesser authors, might emerge as trite sentimentality.

Ben and Samantha feel fully realized, their psychic wounds profoundly awful, devastatingly immediate, and heartbreakingly believable. That easy realism slips for a moment, at the beginning if the reader pauses to wonder why locals would treat Ben as their therapist, or to evaluate the plausibility of Samantha’s abrupt entrance into his life.

But this is a brief patch of turbulence in an otherwise profound treatise on healing, presented through unforgettable characters.