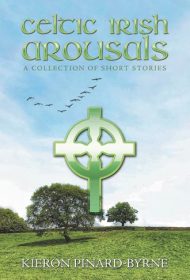 In Celtic Irish Arousals, a collection of 17 short stories, Kieron Pinard-Byrnes offers thought-provoking insight on the varied shades of, and influences on, Irish life over the last century. The stories deliver engaging, confident prose peppered with historical, mythological and literary references.

The first story, “Backstabbers & Backstops,” features politician Patrick O’Hara, who seeks to re-unify Ireland sometime around the late 1960s (the story later jumps ahead 13 years). “[H]is political astuteness had taught him never to turn his back on anything,” writes the author. The story portrays the ongoing political conflict and unrest that has shaped the culture.

In “Celibate Affairs,” Father Devine sees his doctor about a bad case of wet dreams; the latter features a cunning twist. Meanwhile, “Outlook” evokes a sense of community and place, recounting a day in the life of a self-made man of business, family and faith, Dublin greengrocer “Straw Hat.”

Each story reads as a standalone and features a different character lead, but keen-eyed readers will note some familial connections between them. Learned readers will also appreciate the depth added by narrative references to the works of literary masters Henry James, William Yeats, John Milton, et al., as well as mentions of Viking history, and Greek and Irish mythology. And they will be charmed by interesting vernacular (“gobshite,” “elevenses”) and lyrical turns of phrase (“I left her to steep in her own happiness”).

While all stories are well-executed, some hold less interest than others (e.g. the esoteric “Golfer in the Rye”), as with any literary collection.

The stories’ focus on mid- to late-in-life characters will likely hold the greatest appeal to older readers, but they will also interest anyone with Celtic connections.