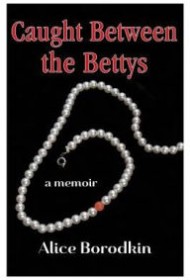 Coming of age during the late 1940s and ‘50s, Alice Borodkin embraced the hat-and-gloves culture of the era. Her mother, a temperamental perfectionist and classy diva, trained her in the ways prescribed by The Good Wife Book and Betty Crocker, but Alice’s future takes a different route. In this telling memoir, Borodkin details how she broke the rules to escape a goody-two-shoes life for a journey along the ”road to Alice.”

A descendant of successful Syrian and European Jews, Alice marries the Russian Jewish boy next door and lives a life focused on wifely duties and the comfort and sense of control that cooking for those around her offers. But by the 1960s, demands of married life, multiple miscarriages, raising an adopted child, and bouts of depression eventually bring out the moxie in her. “And Betty Friedan had arrived on the scene. What a ruckus she was causing in our tranquil domestic lives.”

At 40, the gutsy Alice earns a pilot’s license. “It was the beginning of the end of the Betty Crocker era for me.” From hosting coffee klatches for women’s rights activists to becoming editor of the JFK Airport Press, Alice forged a new path regarding women’s roles. She went on to found an international women’s chamber of commerce, hold a seat in the Colorado House of Representatives and advocate for the global issues of women, among many other accomplishments.

Borodkin’s book is primarily a crazy-quilt collection of self-exploratory essays penned at a writer’s group and, therefore, not very chronological. The disjointed narrative rehashes the emotional, rocky relationships with her mother and children that consistently pop-up throughout. But in a confident, reflective, and clear voice, the author attempts to show how she makes peace with these painful interpersonal struggles while navigating her own potential. As such, this personal history of how one woman discovered her self-worth offers inspiration for readers looking for role models from the first wave of feminism a la Friedan.