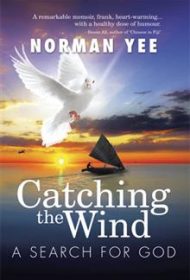 As a poor farmer’s son and first-generation Chinese immigrant to Fiji, Norman Yee started out with little. But by combining his intelligence, people skills and work ethic, he became the chief executive officer for the Civil Aviation Authority of the Fiji Islands, spending 46 years in civil aviation. Catching the Wind: A Search for God, is a memoir of his life, one greatly impacted by his religious beliefs.

At 12, Yee’s parents sent him to a Catholic school, and he later was baptized a Catholic. The rest of his life—as a Catholic, and then as a Charismatic Christian and Pentecostal—he was deeply influenced by religion. He preached, taught and counseled, and his deep relationship with God helped him overcome challenges as he and his wife, Janney, raised five daughters and two sons.

Yee generally keeps his narrative flowing and only occasionally gets bogged down in the minutiae of his job. He frequently uses work-related acronyms, but provides a useful glossary for guidance; without it, mentions of APANPIRG (Asia-Pacific Air Navigation Planning Implementation Regional Group) and other entities would be baffling.

When it comes to his personal life, the author throws in seemingly inconsequential anecdotes and tidbits—he informs us that a taxi driver once took him on an unusual route to a hotel, and he reports the registration number of his first car—but that adds to the charm of Yee’s story.

With some-500 family and work-related photos, this book would seem to have a limited audience, which Yee acknowledges. “[T]his is not a scholarly tome but rather one of a more personal nature…more for family consumption than for the public.” He goes on to say that Catching the Wind is not a comprehensive account of civil aviation and suggests a book that might serve serious aviation buffs better.