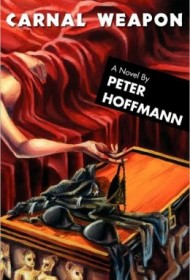 Move the cable show Mad Men from Madison Avenue to Wall Street, throw in a pinch of Mickey Spillane and slather in Harold Robbins. The result is Carnal Weapon from first-time novelist Hoffman, who commits the neophyte sin of melding genres (spy yarn, ’50s morality play) without adequate finesse.

Set in the Eisenhower ’50s, protagonist Jack Preston, is a rising Wall Street lawyer specializing in mergers. In his 20s, Jack is a Boy Scout; he dreams of baseball, boxing and the suburban life he plans with his prim fiancé, Judy. But trouble looms in the form of beguiling French expatriate Alice Mercer, who beds Jack with practiced ease. (Who can blame the poor guy? Chaste Judy will barely let him touch her “cupcakes.”) Alice is an industrial spy determined to get Jack to reveal the names of companies planning takeovers. Before he can say “Untie these damn ropes!” he’s facing an insider trading rap, and Alice is besotted with grief over what she’s done to the man she may, in fact, love.

Hoffman’s writing isn’t terribly sophisticated and can be stilted (“The heather and thistle in his name didn’t match the polish in his diction, which he spiced with just a hint of Fifth Avenue lockjaw that bespoke old money”), and chapter lengths range from a half-dozen pages to a dozen paragraphs. That’s dysfunctional pacing at best. But we get a rich sense of the uptight ’50s, the central characters are boldly drawn, and Hoffman ultimately redeems a formulaic story with a courtroom finale that keeps you turning the pages.