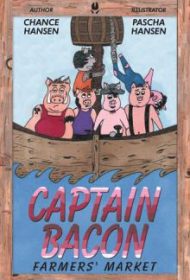 Bacon, a hard-charging pig with a peg leg, captains the pirate ship Squealer. Readers follow his takeover of Beaker, a ship manned by chickens, and a subsequent failed attempt to loot the Sea Cow, a ship run by cattle. Throughout, Bacon expresses anxiety about running into a certain ship with tattered sails, which a former crew member warned him about.

The last ship Bacon comes upon is that very one, manned by aggressive goats. Bacon’s crew is thus thwarted and the Squealer stolen from them. Bacon and crew then find a desert island and decide to build a new ship to continue pirating.

The subtitle refers to the various animals Bacon encounters—a veritable farmers’ market—and the story is driven by slapstick antics (the book opens with Bacon slipping on a banana and closes shortly after he gets a terrible sunburn after waking up from a long nap) and is chock full of puns (the pigs sleep in “ham-mocks”; Bacon worries the chicken-run ship will “fly the coop”). Young readers will surely enjoy such moments.

However, although we know Bacon is driven by the desire to loot other ships and a love of food, there’s little other character development or backstory. This makes the narrative feel meandering and lessens the stakes during each takeover. Further, while the ship with tattered sails is foreshadowed throughout, story twists generally come out of nowhere, denying readers a sense of investment. For example, in the final pages, Captain Bacon summons a giant, and previously unmentioned, sow from below deck in a desperate-but-failed attempt to save his ship.

Captain Bacon: Farmers’ Market is an uneven offering that requires more emotional payoff. Still, it should appeal to young readers with a particular sense of humor, especially those who enjoy pirate or adventure tales.