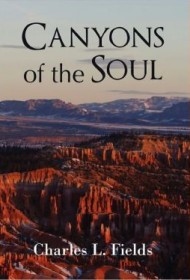 This sequel to Charles L. Fields’ first Charles Stone adventure, Sentimental Me, finds the lawyer, sculptor and amateur poet on the case once again for Franklin Life Insurance Company. This time, Stone must leave his Boston home for Arizona to investigate a renegade Mormon sect led by self-styled prophet Lucas “Luke” Simon.

Simon is an evil megalomaniac who uses the sect’s women and children for his sexual satisfaction. When Elena, the wife of one of Simon’s followers, escapes from his clutches, she becomes a romantic interest for Stone. Meanwhile, Brigadier General Jane Meyers, stationed in Arizona, holds a long-time grudge against Stone over the death of her border agent lover and teams up with Simon to bring Stone down. During his lengthy cross-country journey, Stone acquires a powerful crystal and a beehive charm that turn out to be very helpful to his quest.

Though set up as a thriller or adventure novel, Canyons of the Soul offers little in the way of suspense or action. There are no unusual plot twists or surprises: Stone accomplishes his mission in a rather perfunctory fashion. A substantial portion of the book is devoted to Stone’s rambling conversations with fellow airline passengers and restaurant patrons or equally lengthy off-topic internal monologues. These passages make Stone seem less like James Bond, to whom the novel refers frequently, and more like the droning relative everyone wants to avoid at Thanksgiving. Fairly frequent punctuation and spelling errors (the Book of Mormon is referred to throughout as the “Book of Mormons”) also detract from the reading experience. Stone’s encounters with the occult add an unusual touch but are vastly underutilized.