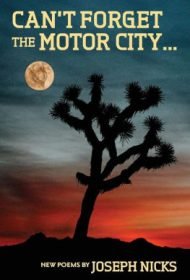 Joseph Nicks’ poetry collection Can’t Forget the Motor City… ruminates on the speaker’s past choices and mistakes, places he’s traveled and lived, and his enduring love for his birth city, Detroit, Michigan, to which the book’s title refers.  Consisting of lyric, free-verse poems, the book is bracketed by a prose prologue and a map of Detroit followed by two appendices.

The author clearly enjoys language play, as evidenced by title puns like “From Here to Uncertainty” and “Making America Grate Again.” Despite such amusements, his poems generally evoke a somber tone, often lamenting the passage of time; for example, “You’re Still the You of Your Youth” remarks on the spark of youth that endures in a person: “it’s still you/ so long, deep down there/ at the bottom of your birthdays-/ that youngest you has outlived/ every later iteration.”

Such thoughts can be intriguing. But overall Nicks’ poems are hampered by a penchant for abstract thought over evoking specific sights, sounds, tastes, and smells. The pieces employ mostly cerebral terms, as in: “wounded spirit/ harried thoughtfulness,” “perturbing my inertia,” “tortured writhing/ of your conscience,” “deeply-festering [sic] inner wounds.”

One exception is “Stolen Moments Of Gladness #3, which lists specific musical moments that have galvanized the speaker. Here, his descriptions become notably more vivid and concrete:  “The way your eyes roll over until you can see the back of your own skull when Bruce sings out…”  The collection’s prose prologue—a timeline of the author’s personal and family history—is similarly vivid and concrete: “By 1978 […] my car was being eaten away by the road salt of winter and my dog was battling heart worm for the second time.” More moments like these would greatly enhance this work.

The poems in this collection would be improved with greater attention to fresh imagery and sharp detail. Still, those who feel the sorrows of time slipping away will relate to the speaker’s thoughts within these pages.