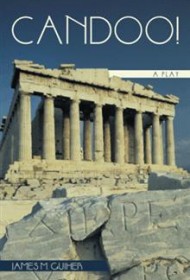 According to the book jacket, on visiting the Parthenon, James M. Guiher “was so overwhelmed that he eventually fired himself from his corporate job to write about the beautiful art and profound wisdom of the ancient Greeks.” This delightful play, his first, is the result.

A.J. “Candoo” Jones, a pistol-totin’ Texan, wants nothing now that he has purchased the Acropolis, “the most famous address in the world.” He wants nothing, that is, other than to continue “just bein’ rich and powerful.”

Life though, is not so simple for the rich oil man as he sets up camp on the east façade of the Parthenon. A stream of visitors, including Greek gods, show up one by one at his new abode to chat about what they want. His son Arthur, a recent Stanford MBA graduate, is first. He now wants to run the company, diversify, and make more money by selling water in the form of Antarctic icebergs to Saudi Arabia.

Enter Sheikh Abdul al-Ibaba, who after imbibing several martinis with a pinch of sand (liking them very dry), offers tens of millions for the icebergs before falling down at the Acropolis and catching a scent of oil in the ground. Candoo refuses the sheikh’s iceberg offer, preferring the idea of drilling for oil under the Acropolis.

Meanwhile, the flow of wants continues to demand Candoo’s attention: Gloria, Candoo’s fat sister, wants a wealthy European husband; Elena, daughter of Zeus and Hellas, wants to be mortal; Candoo’s wife wants a divorce; the Prime Minister of Japan wants to buy the Acropolis for the oil; Zeus wants to be respected and powerful again; and the list goes on with much ado and colliding of wants.

This gleeful romp through the Acropolis — rife with threads of greed, power, pain, arrogance, immortality, and insignificance — surprisingly resolves itself in love. In all, a splendid send-up of the rich Houston oil man.