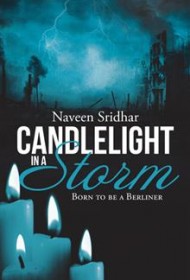 This memoir/biography shows what happens when cultures and political systems grate and clash against one another, as an Indian-born husband examines the course of his marriage by exploring the biography of his German wife.

Born during World War II in Berlin, Renate spends her childhood battling for an education against the barriers placed in her way by the police state that was East Germany.  After manipulating her way to West Berlin, she meets and falls in love with the author, who had recently immigrated to Germany, then travels to India to introduce herself to his relatives and returns to Germany, marriage and family life.

The book is filled with events that cry out for fuller exploration. The xenophobia shown by West Germans toward immigrants, for instance, is touched on but never really examined. Similarly, the difficulties Sridhar experiences as he tries to advance his career as a chemical engineer in a new culture is given short shrift, as are the social complications inflicted on a mixed marriage.

Still, some details linger. A description of the couple’s travels through East Germany during the Cold War, the aftermath of a near fatal automobile accident, and frequent bureaucratic impediments stand out. Most memorable, though, are insights into the compromises any couple must make to survive as one, including the author’s recasting of the family (after the two sons complete dance training) as a traveling magic act.

The third person narration presents an unusual — and not always successful — approach. A first person voice would seem a better fit in places. Nonetheless, the volume effectively portrays the hardships of life in Germany, both East and West, during the Cold War. Most of all, it shows how the sustained love of two people can surmount any adversity imposed by society and its institutions.