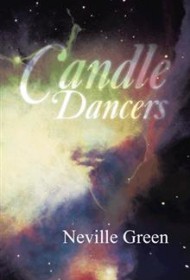 Set in the distant past of a dying galaxy, this imaginative science fiction tale chronicles the performance of a ragtag acting troupe. Known as Candle Dancers because of limited stage illumination, the players travel to dangerous and dilapidated theaters on various planets to perform raunchy shows encouraging reproduction and propagation, as required by law.

The troupe is comprised of humans and humanoids, including the second-in-command, Estoppel Xit, a crippled, one-eyed eunuch with the singing voice of an angel. After one troublesome performance, a corrupt manager attacks the director, Dix Dannering, and puts him in an apparent coma. The rest of the book consists mostly of Dix’s flashbacks and sensory assessments of the current situation. Readers will wonder: Is Dix dead or alive? Was his attack a conspiracy? Does this small story have larger implications? The final chapter satisfactorily answers these questions.

Although engaging from beginning to end, this book could be improved with more moderate use of flashbacks, which make sense in the story but occasionally disrupt the flow. Likewise, an abundance of adjectives and adverbs sometimes proves to be a burden. For example, this sentence about Estoppel overloads the reader: “His buckled and bent skinny legs were clad in thin, tight, pin-striped trousers, and his shiny, cracked, patent leather clown shoes were clapping, flapping loudly down on the old worn stage boards.” (However, the preceding sentence uses vivid – and moderate – descriptive language that brings the character alive: “He was now springing onto the stage like a frenzied marionette with its strings twisted, the tails of his black evening coat flying out behind him.”)

Light editing to fix spelling, punctuation, and grammatical errors — such as “audience were,” “would have found away,” “he acknowledge that,” “pointless to prolonged this,”— would increase reader enjoyment.

Overall, however, this is an entertaining story that should intrigue sci-fi aficionados, particularly those with a fondness for live theater.