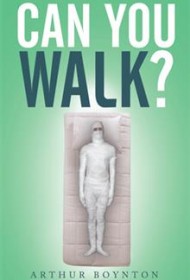 In Can You Walk?, Arthur Boynton details life as an ambulance driver in Yorkshire when the concept was still new and being defined. His slim memoir is casually written, as if he were chatting in a pub.

The author was introduced to the idea of helping the injured as a mere five year old, when nurse trainees at the start of WWII struggled to lift grown bodies and drafted him to use as a live model. Later, military service trained him to work as a lab tech, and eventually a stint as a volunteer ambulance driver led to a paid position doing the work he discusses here.

Boynton kicks off the book sounding like a man with an ax to grind; he gripes in all caps about volunteers who received “NO PAY” as ambulance drivers (although that’s generally the definition of “volunteer”). But he quickly moves on to vivid stories about the job.

When he started, ambulance drivers simply delivered those in crisis to the nearest hospital. As medicine advanced, the idea of the “golden hour” after an emergency meant that often a patient’s best chance for survival relied on some help while en route, such as wound care, resuscitation, or receiving oxygen. In his years on the job, Boynton saw everything from the funny to the macabre. For example, he learned it was best to leave dead bodies where they were found; once loaded onto the ambulance, nobody was willing to accept the remains for delivery.

The writing here is full of exclamation marks and asides that can be distracting, and marred by some spelling and grammatical errors and minor repetition. The stories are enjoyable and full of surprises, nonetheless. While the photos and details from the author’s home life are more suitable to an audience of family and friends, his discussion of the evolution of the job of ambulance driver (and associated stories) should please general readers with an interest in the subject.

BlueInk Heads-Up: This book may hold special appeal for historians for its discussion of the evolution of ambulance service.