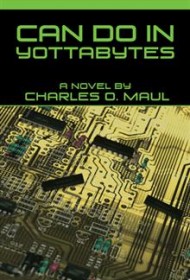 In Charles O. Maul’s novel, Can Do in Yottabytes, the head of a nanotech company is missing his prized invention, a super laptop computer (along with its inventor), and he wants both discretely found, so he turns to former police detective and PI Dan Brandon to recover them.

The stakes are high, because this isn’t just any computer; it’s one that uses nanotechnology, which can instantly solve the problems of global warming and water shortages and usher in a new industrial revolution, to boot, so it’s easy to imagine the disaster if it falls into the wrong hands.

As bodies start to pile up, Brandon turns to his own resources – including the invaluable cell phone, his non-polluting car and a friendly cyborg – and involves local police, the FBI and the CIA, all of whom are eager to cooperate. Along the way, he must avoid the advances of a woman “ready to tango” and keep his girlfriend “with an ample forehead and an elegant nose” happy.

Lost in all of this is any of the tension you might expect to find in such a mystery and any logic you might expect to find in a novel so wedded to technology. Halfway through, we discern that the story is set somewhat in the future (we’ve colonized space), yet it doesn’t feel like science fiction, either. You have to do more than suspend disbelief with Can Do in Yottabytes – you have to be bereft of it altogether. It hurts, too, that punctuation is random and copyediting is MIA.

In short, the story disappoints and seems unlikely to attract a wide audience.