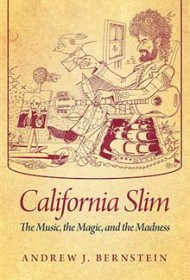 Andrew J. Bernstein’s memoir California Slim opens with the author’s first encounter, as a teenager, with a shaggy banjo teacher, Jerry Garcia, who would go on to lead the iconic San Francisco area rock band, the Grateful Dead. It’s a blockbuster start to a book that ultimately offers mixed results.

Bernstein was a peripheral player in the burgeoning Bay Area music scene of the late 1960s (“California Slim” was his nickname). He became a nightclub owner and part-time concert promoter. He lived through 1967’s Summer of Love and was backstage at the infamous 1969 Altamont Speedway concert where a man was killed in front of the Rolling Stones. He was a hippie. And a school bus driver and, later, a truck driver, for his day job.

During the ‘70s, Bernstein became a member of Willie Nelson’s tight-knit “family” of musicians, crew and hangers-on. His entrée was that he brought marijuana for everyone whenever he was invited to hang out with the band.

Although California Slim is a pleasant enough read, it’s also frustrating. As we read, we assume Bernstein’s going to achieve big goals. But in the end, he moves from one endeavor to the next without much commitment. Ultimately, he dreams of starting a company that helps truck rock tour equipment across the country, but we never know if he accomplishes this.

The book ends with the Hollywood premiere of Honeysuckle Rose, Willie Nelson’s 1980 film debut, which Bernstein was invited to attend. It’s not exactly a momentous climax. Readers are left wondering what, if anything, the author has done since then.

Bernstein has an uncanny (and perhaps untrustworthy) knack for recalling entire conversations verbatim, which is miraculous considering the altered state he was in for much of them. In total, California Slim is a series of snapshots of the era that music fans and baby boomers should enjoy, as long as they don’t expect climactic conclusions or deep revelations about those times.

BlueInk Heads-Up: Readers who enjoyed Tony Sanchez’s 1979 memoir Up and Down with the Rolling Stones (originally titled I was Keith Richard’s Drug Dealer), which also includes dialogue remembered verbatim, will enjoy California Slim.