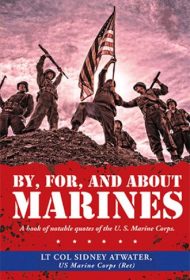 While acknowledging he isn’t a professional historian, Atwater does a fair job summarizing America’s major military engagements from a Marine perspective, and a better-than-fair job tracing the Marines’ history as an organization. He arranges the narrative chronologically, writing lengthy introductions to each major historical epoch, from colonial-era America to the present, while attaching helpful contextualizing notes to each quotation.

As Atwater shows, the Corps’s success in warding off its longtime institutional threat—absorption into the Army—stems from a mixture of adaptability and consistency. Before WWII, the Corps innovated crucial amphibious landing tactics and later, during Korea, the use of helicopters in combat. While tactics changed, Corps values didn’t. Toughness, professionalism, and above all, a self-perpetuating belief in the Marines’ superiority among military organizations comprise an enduring “esprit de corps.” H.L. Mencken wrote, admiringly, that “an unwarlike Marine is as unthinkable as an honest burglar,” while a Soviet propagandist seethed, paying the Corps a backhanded compliment, that the Marines “have been trained more than any other types of American forces” to repress Communism.

Atwater’s most vivid selections come from veterans themselves, including one who recalls WWII’s brutal Pacific theater as a blurry impression of “mounds of stinking dead humans, blankets of flies…the whirring sound of a bomb coming down and its terrible whumph, the peculiar ripping sound of naval artillery striking, a bayonet through a man’s chest…”

The book can become repetitive, partly because combat recollections tend to strike similar notes when viewed in concert and because USMC culture has remained so consistent. Moreover, a few quotations are repeated several times.

However, literary-minded Marines should enjoy Atwater’s work, and people with loved ones in the Corps but little knowledge of its history will find it a fine introduction to a celebrated military tradition.