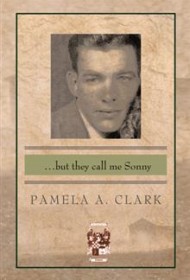 In Pamela Clark’s 700-plus page family saga, she chases two linked mysteries–the hard-bitten life stories of her father and her grandfather.

The Sonny of the title, it turns out, is Clark’s father, one Stallo Vinton Kuhlman, an Iowa-born child of the Depression who left home in murky circumstances at age 14, traveled the country as a street waif, an oil field roughneck, a truck driver hauling livestock and, sometimes, a bar-room brawler.

Sonny’s consuming obsession, we learn from his daughter, was a lifelong search for his own father and, by extension, his lost identity. Deprived of his birthright by a childhood betrayal he suspects but has no way of decoding, Sonny wanders like the outcast Oedipus, his life “one big circle, just chasing my tail.” That he eventually finds his dad, a German immigrant named Herman Kuhlman, and learns the truth about his and his brother Paul’s early lives back on the farm, is this overlong book’s chief satisfaction.

A former construction company executive, writer Clark also spent years as a fraud investigator in the banking industry, a skill that serves her well as she untangles her family’s complicated history. It’s hard to imagine a first-time writer with more courageous energy and perseverance.

But her book is deeply in need of editing. The story suffers from melodramatic repetitions (countless times, the protagonist wonders aloud who he is; countless times, he wails his regret) and the prose is often murky, as in this contradiction: “The small room is dark, but the sun waits behind a drawn shade so he doesn’t need to reach for the lamp.” Peppered with countrified dialect (everyone’s “talk’n” and “eat’n”), the book unspools in an ungainly limbo between biographical and novelistic techniques.

Despite it all, Sonny’s tormented search for self, which ends with a tragic car accident on a quiet road in Waterloo, Iowa, has an undeniable poignancy and force.