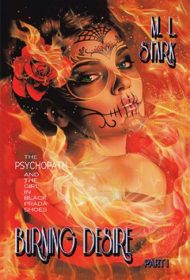 Burning Desire is the first of a trilogy of novels about Mary, a 50-year old Danish woman involved with a manipulative sexual predator.

When Mary first meets Dr. Drake Lucifer Bates, she’s at a low point. Her husband, Paul, is unfaithful, and she’s alone at their property in Spain, rather than at home in Copenhagen with Paul and their children. Drake is older than Mary, handsome and charming. Although he’s treating her for a foot problem, Drake quickly convinces Mary to strip to her underwear and allow him to touch her in inappropriate ways.

Vulnerable and needy, Mary is drawn into repeated visits to Drake’s clinic and a relationship that becomes abusive and dangerous. The novel includes a troubling rape scene as well as graphic descriptions of physical intimacy (“I’m sucking so much on this floppy cock my lips become blue”).

Stark skillfully describes the story’s settings and cultures, including those of Macau, Bali, Spain and Denmark. She notes in her introductory chapter that the novel is based on real events, which makes some episodes highly authentic and impactful: for example, when Stark portrays the way Drake preys upon Mary’s religious convictions to exploit her.

In novelistic terms, however, the story falters. Mary, the narrator, regularly interrupts—as in, “Ok, not to ruin the story…”—and reflects on what happened with the benefit of hindsight. In the first chapters, she addresses Drake directly, berating him for his treatment of her and giving away future plot twists. The narrative also jumps around in time, adding to the confusion.

With the exception of the author’s setting descriptions, the writing is weak, replete with grammatical errors, incorrect word choices (“glut” vs. “glute,” “chock” vs. “shock,” etc.), confusing tense changes, and stilted dialogue.

Because the story is based on real-life experience, readers will sympathize with Mary and her struggles. But the narrative requires greater polish to appeal to a wide audience.