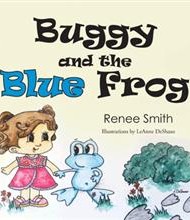 Buggy, a young girl who loves to help people, meets a blue frog and tries to help him fit in with his friends, in Renee Smith’s picture book Buggy and the Blue Frog.

Following large, strange footprints, Buggy discovers Wiley, a giant blue frog who is sad because his unusual appearance has caused other frogs to shun him. Buggy brings Wiley to Mrs. Smelly Cat, who sews a green cape for him, to make him look more like other frogs. Next, Buggy’s friends Chocolate (a monkey) and BeeBee (a bee) offer Wiley a fake tail and artificial wings; Buggy believes these additions will make Wiley’s friends to see him as special.

But Mr. Weatherby, a wise owl, tells Buggy and Wiley that Wiley’s friends should realize that he’s special without the added features. He suggests Wiley talk to his frog friends and explain how their behavior has hurt him. When he does so, all ends happily.

Mr. Weatherby’s moral is admirable but unrealistic. The other frogs tease Wiley about his excessive size and blue color, but after Wiley tells them that their behavior “hurts my feelings, and I just thought you should know,” they immediately become apologetic and loving. It’s rarely that easy to win over others in real life and doesn’t gel with the characters’ earlier nastiness. The harder message to learn—rejoicing in your individuality and walking away from those who abuse you—goes undelivered.

There’s a recurring pattern of missing and misplaced punctuation throughout the book: “‘Let’s go’ said Wiley as they hopped on his tricycle…” And sometimes, this results in sentences that contradict the author’s intended meaning: “ ‘Oh. Wiley,’ exclaimed Chloe.” The colored-pencil illustrations are appealing, though they are a bit raw and often lend an amateur look to the book.

All told, Buggy and the Blue Frog is a commendable, but imperfect effort that would have more appeal with some revision.