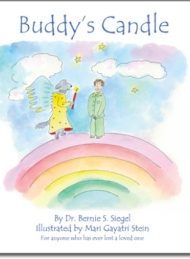 In this children’s picture book from best-selling self-help author, Dr. Bernie S. Siegel, a father relates a poignant childhood memory to his son.

A day after his son Simon’s ninth birthday, the father explains that when he was Simon’s age, he was diagnosed with leukemia. He tells readers: “I hadn’t shared this story with Simon because I didn’t want to frighten or upset him. I asked him if he would like to hear my story now.”

He then tells Simon about his illness, describing his family’s devastation at the news, and how weak and sick chemotherapy left him. He also notes that he had always wanted a dog, and one day “God stepped in” and a shaggy stray appeared on his porch. After a vet visit revealed “Buddy” had lymphoma and also needed cancer treatment, the two became inseparable.

Eventually, Buddy passed away, and Simon’s father dreamt about a heavenly parade of dogs, each holding a candle. He lit Buddy’s candle, promising him he would think of their love in order to keep his candle burning brightly. The story’s conclusion alludes to Buddy’s reincarnation in a shelter puppy and offers Simon’s father’s wise words to “let our inner light shine.”

Maya Gayatri Stein’s expressive ink and watercolor illustrations lend a simple, whimsical charm to the book, and the story delivers warmth, humor, and wisdom. However, the dialogue sometimes rings unnatural: “Gee Dad [sic] you must have felt very scared and lonely.” And some children may not be familiar with chemotherapy or bone marrow transplants, terms that aren’t explained.

Additionally, the story is too long for a picture book. A chapter book format would be more appropriate, as there are many sweet, emotionally-charged moments that deserve to be lingered over.

Although a format change could enrich the story, Buddy’s Candle should find an appreciative young audience. Children will learn important lessons about loss and are sure to fall in love with the shaggy dog named Buddy.