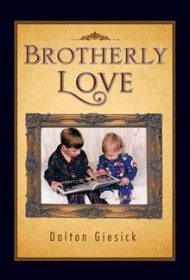 There are few things more shattering than the sudden death of a small child. It’s a parent’s worst nightmare; one many never fully recover from. But young siblings also suffer mightily, their confusion and fear often forgotten in the vortex of the grown-ups’ grief.

This is the backdrop of Brotherly Love, a sweet tribute by Dalton Giesick to his little brother, Dayton, who died at age 4. Giesick, now in his early 20s, was only 8 when his brother was whisked off by a Life Flight helicopter one night in 1998 as his mother wept and emergency workers rushed in and out of his house. The image of a scared little boy sitting alone on the stairs as his brother is being taken away is chilling and heartbreaking. Seen through the eyes of a doting 8-year-old big brother, most of the book is a preamble to that fateful night as it chronicles the happy events in the last year and a half the boys have together: a move from Kansas to Colorado, building a fort with their grandfather, trick-or-treating. The normalcy is painful, as readers know what’s coming.

Giesick writes in the voice of the boy he once was. It mostly works in foreshadowing a childhood soon to be altered. But since at that age he probably was not privy to all the adult happenings around him, the device leaves enormous gaps in the story. What did his brother die from? Had he been sick before? How much did his parents know? How did their marriage fare afterward?

Giesick’s book is written more than a decade after his brother died. A final chapter or epilogue is needed to explain what happened to the family after Dayton died and how it changed his own life as he grew into a young adult. Without any closure, the book feels incomplete and fails to fully develop into what could have been a much richer story of the brother left behind.