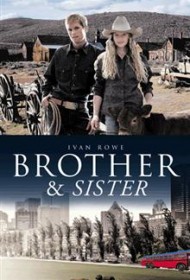 At its core, Ivan Rowe’s novel Brother & Sister contains the bare bones of an engaging story, but this narrative shoots off in so many directions at once it’s hard to know just how to classify it.

Do we have a how-to about running a cattle ranch with detailed explanations about managing the stock in winter, feeding cowboys, breaking a bucking horse, and castrating young bulls? Is it a love story? Or maybe it’s about complex family relationships involving selling babies, battling siblings, parents and step parents? There are even elements of the sex manual here, though expressed in earthy terms largely unfamiliar to that genre.

Diversions aside, the basic plot revolves around 16-year-old runaway Ed Spitzer. Ed arrives in Denver only to be, in short order, hustled out of his money in a pool hall, raped by his flophouse roommate, rescued by a kindly Salvation Army major, and sent off to work on a Wyoming ranch. There, after making a life for himself and falling in love, he gets caught in a tangle of experiences that threaten the harmony he has found. A man is killed, a trial ensues, a woman dies. Meanwhile, Ed discovers a past that stains both his present and his future, pushing him to the brink of disintegration and landing him in a mental hospital, where the author leaves him with some hope for his eventual redemption.

There is enough plot here for several novels; were it only tightened, more closely copyedited and the rough passages smoothed over (e.g.: “The bathrooms in the Embassy were comm. [sic] ood [sic] clad only in his jeans…”), we might be left with a single solid one. As it stands, though, the narrative changes direction so often and so abruptly that the book can’t sustain a reader’s interest.