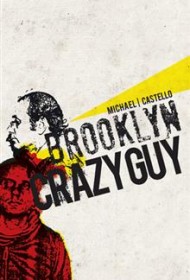 Brooklyn Crazy Guy chronicles a criminal’s life. Raised in East New York, Michael Castello, the book’s author, evolved from a juvenile menace into a seasoned career-criminal who spent 25 years in prison and 11 years as a fugitive. Set in Brooklyn, Philadelphia and Baltimore, the book details a man bent on madness and depravity who surrounds himself with neurotic mobsters and crude women.

The story is a free-flow offering of lust and violence, punctuated with amusing moments of honesty. For example, although the press painted Castello as a criminal mastermind, he saw it differently: “And as far as being a mastermind, ”he writes, “in actuality I was a masturbator.”

Castello’s humor is unique, he often displays great control and originality, and his descriptions of lost individuals – the imbalanced, immoral or depraved –are provoking. He also builds climactic scenes well, such as car chases, bank robberies and his escape from prison.

On the down side, Castello’s style is frequently hampered by irrelevant and repetitive details. Many passages are littered with clichÃ©s. (“Saved the day,” “earned my keep,” “don’t shit where you eat,” “die young and be a good-looking corpse,” are all found on a single page.) And his obsession with sexual conquest, while intriguing, can come off as downright smutty.

The book is fast-paced, without much introspection, symbolism or other flourishes to distract the reader from the action. When Castello does pause to make sense of the account, he fails to make much sense of the madness, revealing a rather empty purpose: “My only hope is to be successful and become a celebrity,” Castello writes. The message does, however, enhance the narrator’s delusional qualities, and the line that follows gives readers reason to question if the narrator is more self-aware than we give him credit for: “My only fear is that it’s hard to differentiate between a celebrity and a clown.”