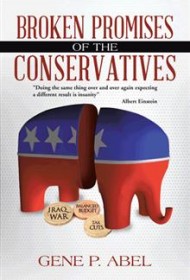 In Broken Promises of the Conservatives, author Gene Abel looks back through history at conservative policies that have failed to live up to their promise and surmises that a progressive agenda is better for Americans today.

Abel worked as a “Republican committee person” in the 1970’s, but being active in his church seems to have awakened a desire to do more for the least among us. Unfortunately, even if you agree with his politics, his arguments leave much to be desired.

Abel jumps from topic to topic, but doesn’t connect the dots for readers. He calls the mortgage crisis and Credit Default Swap “worthless Ponzi schemes,” but doesn’t explain what a Ponzi scheme is or adequately lay out how the crisis came about. Jumping from the Great Depression and Hoovervilles to the recent recession, he quotes statistics showing that job growth is stronger with the Democrats in power, but doesn’t focus on the topic long enough to present a clear discussion.

In an examination of social issues, Abel notes, “One grassroots effort to try and defeat Paul Ryan’s food stamp cuts is headed by Sister Simone Campbell. She is operating a thing called, ‘A nun on the bus’. [sic]” There’s no further explanation of what this “thing” is, or any source cited where readers could find more information.

It’s clear that Abel is passionate about his cause, but deriding “those that drink the conservative Kool-Aid” is unlikely to win anyone to his side who wasn’t there already, making it unclear what purpose the book is serving beyond venting the author’s frustration.

In sum, while Broken Promises of the Conservatives might attract readers who are unambiguously liberal, it does little to win new members to the cause.